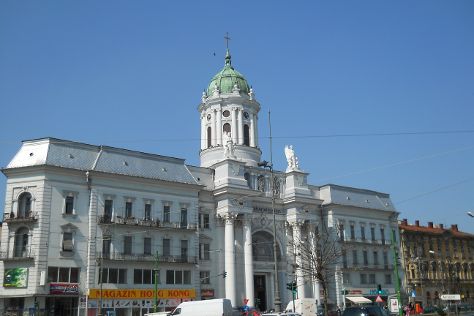 ©
Arad is the capital city of Arad County, historically situated in the region of Crișana, and having recently extended on the left bank of the Mureș river, in Banat region of western Romania.An important industrial center and transportation hub on the Mureș River, Arad is also the seat of a Romanian Orthodox archbishop and features two universities, a Romanian Orthodox theological seminary and a training school for teachers. Get a sense of the local culture at St. Anthony of Padua Church and Timisoara Orthodox Cathedral. Family-friendly places like Oradea Zoo and Darvas- La Roche House will thrill your kids. Explore Arad's surroundings by going to Ghioroc Lake (in Ghioroc), Timisoara (Bastionul Theresia, Timisoara Historical Center, & more) and Șoimoș Fortress (in Lipova). There's much more to do: make a trip to City Hall, take in the architecture and atmosphere at Holy Trinity Cathedral, learn about winemaking at Balla Geza Winery, and test your team's savvy at popular escape rooms.

For other places to visit, reviews, more things to do, and more tourist information, go to the Arad trip planner .

If you are flying in from Spain, the closest major airport is Timişoara Traian Vuia Airport. November in Arad sees daily highs of 13°C and lows of 3°C at night. Finish your sightseeing early on the 12th (Thu) so you can travel back home.
more less

Things to do in Arad