When in Mexico City, make a side trip to see Zona Arqueológica de Teotihuacan Estacionamiento Puerta 5 in San Juan Teotihuacan, approximately San Juan Teotihuacan away. And it doesn't end there: get a new perspective on nature at Museo Nacional de Antropologia, examine the collection at Museo Frida Kahlo, admire the landmark architecture of National Palace (Palacio Nacional), and indulge in some culinary diversions at a local gastronomic tour.

Stuttgart, Germany to Mexico City is an approximately 16.5-hour combination of train and flight. You can also fly; or do a combination of train, flight, and bus. Due to the time zone difference, you'll gain 7 hours traveling from Stuttgart to Mexico City. While traveling from Stuttgart, expect much hotter days and somewhat warmer nights in Mexico City, ranging from highs of 28°C to lows of 12°C. Wrap up your sightseeing on the 29th (Sun) to allow time to travel to Palenque.
more less

Things to do in Mexico City 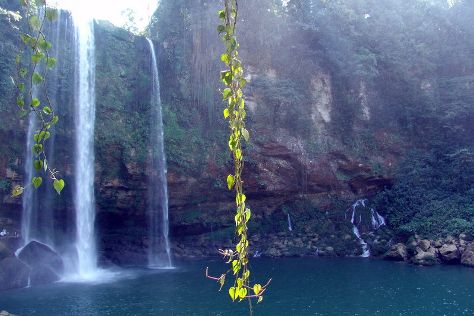 Palenque remains best known for the nearby ruins of an ancient Mayan city, which probably flourished around the 7th century CE.

Palenque is known for nature, historic sites, and zoos & aquariums. Your plan includes some of its best attractions: explore the ancient world of Zona Arqueologica de Palenque, admire the sheer force of Welib Ja Waterfalls, take in the architecture and atmosphere at Iglesia Santo Domingo, and learn about wildlife with up-close encounters at Aluxes Palenque.

You can fly from Mexico City to Palenque in 3.5 hours. Alternatively, you can do a combination of flight and bus; or drive. Wrap up your sightseeing by early afternoon on the 1st (Wed) to allow time for travel to Chichen Itza.
more less

Things to do in Palenque

Featuring the largest archeological site of the ancient Mayan civilization, Chichen Itza remains one of the most visited tourist destinations in Mexico.

Things to do in Chichen Itza

The only Mayan site built to overlook the ocean, Tulum remains a coastal paradise preserving the last vestiges of a pre-Hispanic civilization.

Venture out of the city with trips to Cobá Zona Arqueológica Cobá (in Coba) and Playa del Carmen (Xcaret, Scuba & Snorkeling, &more). There's lots more to do: explore the ancient world of Tulum Archaeological Site, contemplate the waterfront views at Casa Cenote, make a trip to Plastic Flamingo, and Head underground at Gran Cenote.

To see reviews, traveler tips, topicsMoreInfo.option.ratings, and other tourist information, use the Tulum vacation planner.

Getting from Chichen Itza to Tulum by car takes about 2 hours. Other options: take a shuttle; or take a bus. Expect slightly colder temperatures when traveling from Chichen Itza in April; daily highs in Tulum reach 33°C and lows reach 24°C. Wrap up your sightseeing on the 6th (Mon) to allow time to drive to Cozumel.
more less

Things to do in Tulum

Thanks to the island's outstanding scuba diving and snorkeling options, Cozumel tourism sector remains a major employer and the main source of income for this Caribbean getaway.

Cozumel is known for wildlife, outdoors, and theme parks. Your plan includes some of its best attractions: get outside with Outdoor Activities, get engrossed in the history at Museo de la Isla de Cozumel, find something for the whole family at Chankanaab Adventure Beach Park, and see the vivid underwater world at Palancar Reef.

To see maps, photos, more things to do, and other tourist information, you can read our Cozumel planner.

You can drive from Tulum to Cozumel in 2.5 hours. April in Cozumel sees daily highs of 33°C and lows of 24°C at night. Cap off your sightseeing on the 11th (Sat) early enough to travel back home.
more less

Things to do in Cozumel