©
As-Suwayda, also spelled Sweida or Swaida, is a mainly Druze city located in southwestern Syria, close to the border with Jordan.It is the capital of As-Suwayda Governorate, one of Syria's 14 governorates, bordering Jordan in the South and Daraa Governorate in the West and Rif Dimashq Governorate in the north and east. Eschew the tourist crowds and head to Shahba City and Helios Temple. When in As Suwayda, make a side trip to see Bosra ash-Sham in Daraa, approximately Daraa away. Next up on the itinerary: explore the galleries of As Suwayda Museum and steep yourself in history at Temple of the Sun God.

For where to stay, ratings, and more tourist information, you can read our As Suwayda road trip planning site.

Things to do in As Suwayda

Locals claim that the Prophet Muhammad refused to enter Damascus on his journey to Mecca--he wished to enter Paradise only once in his lifetime.

Step off the beaten path and head to Deir Mar Takla and Sayyida Ruqayya Mausoleum. Venture out of the city with trips to Cherubim Patriarchal Monastery (in Saydnaya) and Maaloula (Deir Mar Musa El-Habashi, Mar Sarkis, &more). There's much more to do: take in the spiritual surroundings of Damascus Umayyad Mosque, admire the striking features of Khan Asaad Basha, browse the eclectic array of goods at Souq al-Hamidiyyeh, and get engrossed in the history at Al Azem Palace (Palace of As'ad, Pasha al-'Azm).

Getting from As Suwayda to Damascus by car takes about 1.5 hours. Expect a daytime high around °C in September, and nighttime lows around °C. You'll set off for Hamah on the 6th (Sun).
more less

Things to do in Damascus

The conservative city of Hamah stands as the fourth-largest urban center in the country, and boasts a number of historic sites and a rich, complex heritage to match.

To see other places to visit, more things to do, ratings, and more tourist information, use the Hamah online sightseeing planner.

Drive from Damascus to Hamah in 3 hours. Expect a bit warmer evenings in Hamah when traveling from Damascus in October, with lows around °C. You'll set off for Lattakia on the 14th (Mon).
more less

Things to do in Hamah

The country's main port city, Lattakia tells of a rich and complex history, in which numerous rulers and empires coveted its Mediterranean coastline.

Explore hidden gems such as Arwad Island and Saladin Castle. Get out of town with these interesting Lattakia side-trips: Old Village (in Kassab), Cathedral of Our Lady of Tortosa (in Tartus) and Saladin (Selahedin) Citadel (in Safita). The adventure continues: steep yourself in history at Salah el-Din Citadel, enjoy the sand and surf at Blue Beach, and take in the waterfront at Seaport.

For other places to visit, reviews, more things to do, and tourist information, read our Lattakia trip planning app.

Traveling by car from Hamah to Lattakia takes 2 hours. In October, plan for daily highs up to °C, and evening lows to °C. You'll set off for Aleppo on the 21st (Mon).
more less

Things to do in Lattakia

Inhabited since ancient times and boasting a rich and turbulent history, Aleppo's rustic old town, historic mosques, and lively bazaars used to attract tourists from all over the world.

You'll discover tucked-away gems like Dead City of Serjilla and Turkish Bath (Hammam Yalbougha al-Nasri ). Next up on the itinerary: admire the striking features of Great Mosque, explore the ancient world of Ebla Citadel, stroll around General Park, and explore the galleries of Aleppo Museum.

For other places to visit, reviews, photos, and more tourist information, you can read our Aleppo visit planner.

Getting from Lattakia to Aleppo by car takes about 2 hours. Traveling from Lattakia in October, you will find days in Aleppo are a bit cooler (°C), and nights are about the same (°C). On the 29th (Tue), you're off to Deir Ezzor.
more less

Things to do in Aleppo

©
Deir ez-Zor is the largest city in eastern Syria and the seventh largest in the country. You'll discover tucked-away gems like Dura-Europos and Deir ez-Zor Museum. There's still lots to do: contemplate the waterfront views at Euphrates River and delve into the distant past at Halabiye and Zalabiye.

Use Inspirock's suggestions to plan your Deir Ezzor trip and find the best activities and attractions for your vacation.

Getting from Aleppo to Deir Ezzor by car takes about 5 hours. You'll set off for Palmyra on the 5th (Tue).
more less

Things to do in Deir Ezzor 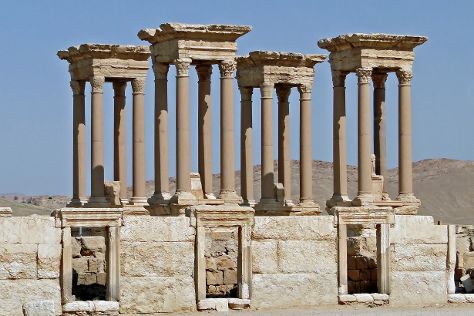 Dating back to the Neolithic period, Palmyra once stood as a center of wealth and culture.

Step off the beaten path and head to The Tetrapylon and Palmyra Museum. There's more to do: contemplate the long history of Site of Palmyra and explore the historical opulence of Muslim Castle Qala'at ibn Maan.

Getting from Deir Ezzor to Palmyra by car takes about 2.5 hours. In November, plan for daily highs up to °C, and evening lows to °C. On the 18th (Mon), you'll travel back home.
more less

Things to do in Palmyra