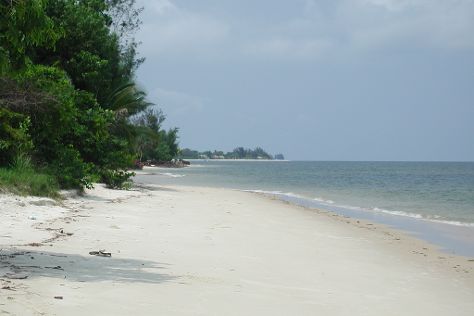 The capital of Gabon and home to almost half of the country's residents, Libreville differs from many African cities, with paved roads, clean streets, and luxurious residences.

Get in touch with nature at Pointe-Denis Beach and Akanda National Park. Get some historical perspective at L'Eglise St-Michel Libreville and Hassane II Mosque. Spend the 4th (Mon) in the pleasant surroundings of Pongara National Park. There's still lots to do: explore the galleries of Musee des Arts et Traditions du Gabon (Museum of Art and Culture), pause for some serene contemplation at Cathedrale Saint Pierre, shop like a local with Marche du Mont-Bouet, and contemplate in the serene atmosphere at St Marie Cathedral.

If you are flying in from United States, the closest major aiport is Libreville Leon M'ba International Airport. October in Libreville sees daily highs of 83°F and lows of 75°F at night. On the 6th (Wed), you're off to home.
more less

Things to do in Libreville