©
Hendaye is a commune in the Pyrénées-Atlantiques department and Nouvelle-Aquitaine region of southwestern France.The town, France's most southwesterly and a popular seaside tourist resort, stands on the right bank of the River Bidassoa – which marks the Franco-Spanish border – at the point where it empties into the Atlantic Ocean in the French Basque Country.Hendaye has three distinguishable parts: la ville, which stretches from Saint Vincent's church to the area around the SNCF railway station and the industrial zone; la plage, the seaside quarter; and les hauteurs, the villas and camping sites on the hills between and behind the other two areas.HistoryHendaye acquired its independence from the Urrugne parish in 1598, when Saint Vincent's church was built. Change things up with these side-trips from Hendaye: Bayonne (Room Escape Games & Cathedrale Sainte-Marie de Bayonne) and Biarritz (Aquarium de Biarritz, Rocher de la Vierge, & more). There's lots more to do: stroll through Plage d'Hendaye, take in the pleasant sights at Le Port de Guethary, step into the grandiose world of Chateau Observatoire Abbadia, and take a leisurely stroll along Promenade Jacques Thibaud.

Newark, USA to Hendaye is an approximately 13.5-hour combination of flight and car. The time zone difference moving from Eastern Standard Time (EST) to Central European Time (CET) is 6 hours. October in Hendaye sees daily highs of 69°F and lows of 56°F at night. Finish your sightseeing early on the 23rd (Wed) to allow enough time to drive to Saint-Jean-Pied-de-Port.
more less

Things to do in Hendaye 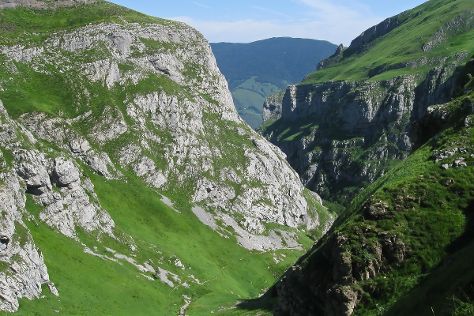 For more things to do, other places to visit, where to stay, and other tourist information, read Saint-Jean-Pied-de-Port driving holiday planner .

You can drive from Hendaye to Saint-Jean-Pied-de-Port in 1.5 hours. Wrap up your sightseeing by early afternoon on the 27th (Sun) to allow enough time to travel back home.
more less

Things to do in Saint-Jean-Pied-de-Port